Get fresh music recommendations delivered to your inbox every Friday.
We've updated our Terms of Use. You can review the changes here.

Beneath a canopy of angels​…​a river of stars 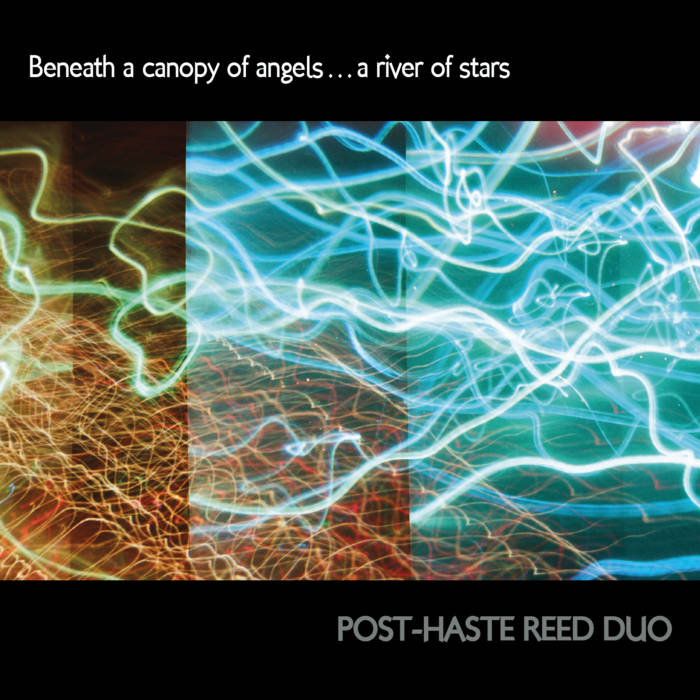 bioMechanics (2011) for saxophones, bassoon, and electronics, explores interaction of the organic and technological. These two categories, however, do not offer a simple binary, as our technology was created by us, organic beings, for the purpose of serving our organic wants and needs, and our modern lives are often a blur of the biological and technological. This ambiguity is expressed in bioMechanics through the intersection of musical control and freedom, rigidity and improvisation, and the many different forms of musical virtuosity.
---Simon Hutchinson


Lacrimosa (1991) by Louis Andriessen (b. 1939) is based on verse 18 from the Dies Irae. Originally scored for two bassoons, the work explores this verse through the use of microtones in the two voices. For this and with his other 1991 works: M is for man, Facing death (written for the Kronos String Quartet), Dances (for soprano and chamber orchestra), Hout (for ensemble), Andriessen received the Matthijs Vermeulen Prize in 1992 for a second time. Dedicated to Shannon Peet and Margreet Bongers, Lacrimosa was written with financial support of the Fonds voor da Scheppende Toonkunst. The arrangement on this album for alto saxophone and bassoon was made at the request of PHRD by Jeff Chambers.
---PHRD


Confluences (2014) for alto saxophone and bassoon, attempts to find the various ways in which the two instruments can converge in performance. Throughout the course of the work, these confluences are expressed in tessitura (as instruments match color in shared registers), motive (as they intermittently share melodic and rhythmic material), and space (as they explore diverse places on the stage or performing space). Of course, these convergences are given even greater meaning through various dramatic moments of divergence.

Each movement takes inspiration from some aspect of astronomy or observed interstellar space for its respective title. The first movement, “Rogue,” is named after the phenomenon of rogue planets, or heavenly bodies that do not conform to traditional, predictable orbits. In this movement, saxophone and bassoon are always slightly out of sync, as one is constantly in the process of breaking free of the influence, or ‘gravity,’ of the other.

The second movement, “Receding Orbits,” begins with a plaintive melody derived from permutations of a seven-note row (F#-A-F-C#-D-D#-A#--a conflation of the names “Javier” and “Sean,” respectively, the bassoonist and saxophonist of the Post-Haste Duo to whom the work is dedicated) in the saxophone. This melody repeats in fixed fashion as the bassoon enters articulating its own, independent melody. Each line evolves and develops, seemingly indifferent to the other, the rhythmic relationship between each becoming increasingly strained. At a key moment the instruments erupt into dramatic unity. The movement ends as its principle material descends gently in scale form, as the fragments of a cosmic explosion.

The final movement, “Beneath a canopy of angels... a river of stars,’ aims to explore the more poetic notions of the night sky. True convergence ensues from the beginning of the movement. After a lyrical interlude, opening motives return under increased rhythmic and harmonic strain, only to find their way to ultimate confluence.
---Ethan Wickman


Some thoughts about time (2012)
Indeterminate Movement Order:
Bound
Held
Intertwined
Patience
Stability
Strata
Some thoughts about time consists of a set of short, reconfigurable movements for saxophone, bassoon, and (often) electronics that focus on the temporal qualities of music. The movements addresses various theories about musical time proposed by theorists, psychologists, aestheticians, and, of course, composers. These theories are variously explored, affirmed, contrasted, challenged, and developed within and across the movements of the piece. Some thoughts about time was commissioned by the Post-Haste Reed Duo and premiered at the 2013 Jubilus Festival in Gainesville, FL.
---Lanier Sammons


The music of Songs and Dances grew from things that I love: the lilting groove of a certain Bach aria, drum patterns from a West African processional in a similar groove, a heart-stopping song in a Shakespeare production (it turned out to be an American folk song called “Long Time Traveler”), and some infectious joy bursting from a pop song on the radio. It was a while before I knew where any of it was leading. Quotations, alterations, and additions came into play, and gradually this suite took shape. I hope that it will be enjoyable enough and roomy enough for players and listeners to breathe life into it.
----John Steinmetz

As a bridge between composers with audiences, Post-Haste Reed Duo hopes their efforts to expand the bassoon/saxophone ensemble’s repertoire will inspire and challenge musicians and listeners alike, to create and connect with new music.

Bandcamp Daily  your guide to the world of Bandcamp